Flacco starts vs Miami this week

BenchFiedler said:
Also Kyle Van Noy will be OUT for this game. Hopefully someone else can step up and pressure Flacco.
Click to expand...

He missed practice with a groin.

Please link to where he's been declared out for Sunday's game.
A

Nublar7 said:
I don't believe the Dolphins have actually ever beat Flacco
Click to expand...

6-0 reg season, 1-0 playoffs - by my quick read on football reference.

Nublar7 said:
I don't believe the Dolphins have actually ever beat Flacco
Click to expand...

If Flacco were the same guy at 35 that he was at 25 he'd probably be starting somewhere.

And perhaps those Ravens teams he was on would have kicked our a$$es with me at QB.

Let me tell you something about Flacco from watching him last week. He might be the slowest QB in the NFL right now, he makes Fitzpatrick look like Lamar Jackson

That in itself is not a gold mine but it basically eliminates the juice, and gets you thinking correctly toward what to look for. Apply other angles that work in conjunction with that one.

It works partially because conventional wisdom is the other way. When a team loses everyone is down on them and assumes they'll flop on the road. More often than not the energy level is the other way...upticked. When a road team is coming off a victory the fan base is assuming an extension of good form, then they can't understand the blasé effort.

That simple angle went 10-4 last week...betting road teams off a defeat and home teams if the road team was fresh off a victory.

This is NFL, by the way. Doesn't work as well in college, although not terrible. And it fares best among the middle of the league, the so-called Crowd teams. They nicely sashay back and forth, seldom living up to overboard expectations and seldom free falling when everyone is down on them. I love Crowd teams, the ones that basically win between 5 and 11 games.

At either end of the spectrum are the 12+ level Cream teams and 4 or lower win Crap teams. My systems have more trouble with those categories. Cream often covers even when supposedly in down mode, and Crap can't cover during positive expectancy. That's why I have many angles that trigger wagers on Cream teams even when situation is poor. I'm much rather wager on a Crap team than against a Cream team. For example, this week I'll have the Jets. I fully understand that's a Crap team and could lose by 31. But the angles tend to find Crap teams just when they are about to blossom into semi-Crowd level. After all, the talent disparity in the NFL is basically nothing. Early in my wagering life I didn't have a Crap category at all. But there was more parity at the bottom of the league in that point, because the passing wasn't as prevalent and therefore the quarterback position not as vital.
Click to expand...

So as far as prognosticating the Jets/Dolphins game, are you saying that you think Miami will be a little flat, the Jets up, and the Jets have a higher likelihood of winning, or is this a covering the spread thing. I don't gamble at all, (I would get addicted and be broke) so I really have no clue.

I have to give props to Peyton. Gase was raised to "guru" level due to him. But he's kept his mouth shut for years. I'd love a true, open honest interview with Manning discussing Gase.

BenchFiedler said:
Be careful what you ask for!!! We no longer have a Kiko Alonso for a dirty hit on Flacco. I don't believe Flacco ever lost against the Dolphins.
Click to expand...

It was the Ravens not Flacco. There is a reason Baltimore looked for a replacement and then got casted off of his next team so quick and is now a backup. I'm not saying the Jets cant win this game because anything is possible, but Flacco starting doesnt scare me, and the fact that he's never lost to Miami is irrelevant.

Gases 1st play will be a bomb down field. He's going to hope it makes him look like a genius. 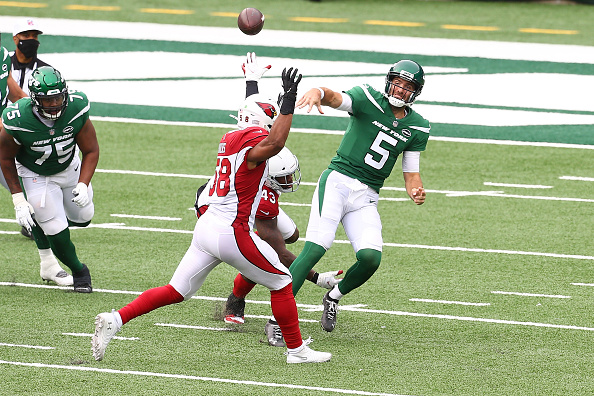 Joe Flacco remains the Jets’ starting quarterback for another week. Sam Darnold will miss Sunday’s game against the Dolphins and Flacco will start in his place, the Jets confirmed today. Darnold suffered an injury to his throwing shoulder two weeks ago against the Broncos, and although he was...

I like this better for us than Darnold. We know what Flacco is; Darnold I feel can pull off some magic on given days.
Click to expand...

History wise, Darnold has some of his worst games vs Miami. Flacco quite the opposite and is actually undefeated vs Miami. Sad I know

Flores says he might be at practice today
S

circumstances said:
If I were the same guy at 35 that I was at 25 that would have been good.

If Flacco were the same guy at 35 that he was at 25 he'd probably be starting somewhere.

And perhaps those Ravens teams he was on would have kicked our a$$es with me at QB.
Click to expand...

Yet they didn't with Matt Schaub or Troy Smith at QB.
R

Joe Flacco starting over Darnold is absolutely bad news for us, given the history.

Sirspud said:
Yet they didn't with Matt Schaub or Troy Smith at QB.
Click to expand...

I'm not saying he wasn't good as well, ten years ago.
C