Head coach Brian Flores is concerned about the state of the Dolphins | Page 2 | FinHeaven - Miami Dolphins Forums
Menu
Log in
Register
Install the app
You are using an out of date browser. It may not display this or other websites correctly.
You should upgrade or use an alternative browser. 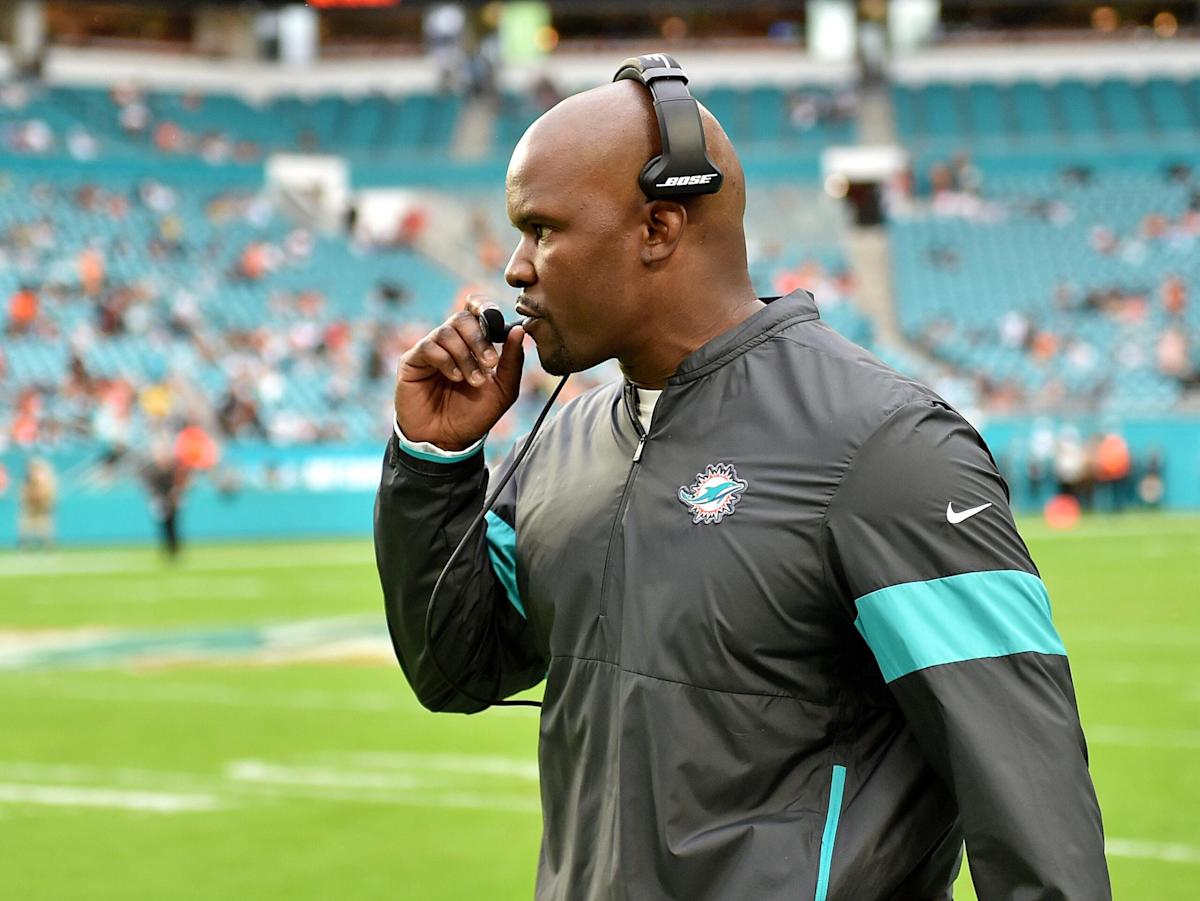 The coach notices the obvious issues with the team's performance.

So in conclusion we need to find a new head coach, this one is way way out of his depth.

ANUFan said:
Think it’s a little too early for the team to be mailing anything in. There are a couple of teams in the AFC Steelers, KC, NE included that aren’t playing too hot. Point being, while not optimum there’s games left to still clinch a playoff berth.
Click to expand...

Agree. I'm not sure the team gave up on, Flo. Gave up on JB? I think so. They could see open receivers JB didn't. They could see passes hit the ground 2 yds in front of the receiver. Ifso, TT's return will help

fansinceGWilson said:
Agree. I'm not sure the team gave up on, Flo. Gave up on JB? I think so. They could see open receivers JB didn't. They could see passes hit the ground 2 yds in front of the receiver. Ifso, TT's return will help
Click to expand...

Exactly! Guys like Gesicki are getting visibly upset and imo it’s because he knows plays are being left on the field. Guys like Wilson are non existent with a Qb like Bristtte. More times than not the throw has to be wide open for him to see it. Sad but true! Look at elite Qbs. And inch of separation is open to them.
D

Look we lost two winnable games mainly because of Brisset. He was brought in as a backup veteran to help step in if Tua went down and he decided to play his better against the Bucs. Which was a little too late. We needed those two wins.
A

Yesterday’s loss wasn’t the real issue, although the blowout was humiliating (especially to a guy like Xavien Howard who was put in his place and embarrassed as an athlete). You don’t expect to beat the SB champs in their building.

It just underscored what a horrendous loss the Indianapolis loss at home was. Brissett played tough yesterday but he was a disaster against Indy and it cost us both in the standings and in our standing in terms of perception. That wasn’t a loss we could afford. If we were sitting here at 2-3, the rage wouldn’t be nearly as fever pitched. But you lose four in a row, and of course this is the reaction you get. Off with their heads.
1

Either way, Flores gets most of the blame and Grier can only get the blame if he is the only person making all the picks without consulting with Flores.

I see the high flying high scoring teams and for the most part they are shootouts and both their defenses suck. Entertaining though! You shouldn't have to score into the 40's to win a football game. But the major factor for the highlight reels stuff is having the guts to call the deep ball and guys catching them. They execute that play multiple times per game. Most of them allow that same play too, but hey, we've got a bunch of quarterbacks dropping dimes that was never considered high percentage and routine until the last couple of years. Call it and execute it and put up sixes, not three's. Coach that, draft the guys who can do it, and call it. If Burrow and Chase can do it, Tua and Waddle can do it. We have to have that too. We can do that.

Either way, Flores gets most of the blame and Grier can only get the blame if he is the only person making all the picks without consulting with Flores.
Click to expand...

I think its both. The team has regressed and those number 1 picks have done jack. Thats a combination of poor scouting, planning, coaching, player management and playcalling. That's a group effort.
S

As a bills fan please keep Flores. He's good for at least 2 wins a year so far.

Grier is a snake
G

Austin Tatious said:
You don’t expect to beat the SB champs in their building.
Click to expand...

Grier/Flores had 3 off-seasons with a ridiculous amount of draft picks and some money for Free Agents; all of which should have been enough to build a playoff-caliber team. So yes, after having all of those resources to improve the team, I do expect Miami to beat the Bucs in Tampa.

The fact that Miami was blown out and embarrassed because of not enough talent due to wasted draft picks, wasted money on Free Agents who were released after one year, and poor coaching and lack of veteran leadership on the team due to the personnel decisions made by Flores, suggests that Grier and Flores are not the guys who should be in charge of this team.

ANUFan said:
it’s obvious the team is in disarray. Like it or not Tua, hopefully, coming back for the London game is going to tell us a lot.

If he can spark the offense then it maybe a path towards righting this season. If not, we’re going to be in for an even longer year.

I’d also say, teams have figured out how to attack this defense. Our belly is soft(middle of the field) and get our DBs running vertical.
Click to expand...

He has a favorable schedule for a rebound, we better beat the winless Jags or this season is over!
T

ANUFan said:
Nope! I think coach Flo is going to get at minimum 1 more year. Unlike most on the board I do think the owner is going to look at his first 2 years favorably and if this year is a regression will give him 1 more year if not 2 years to finish off his contract.

I’d also say this. Look around the league there are some teams that are supposed to be better than us with their full compliment of starts that are struggling too. KC is ONE game better than Miami right now. That same goes for the Steelers, NE, etc.
Click to expand...

There you go making sense

@ Bills fan Sharky.....Have the Bills won a Superbowl? Also, defenses will figure out Josh Allen it is just a matter of time. Good linebackers are his Kryptonite. See the Steelers game.
You guys need to win now.

fansinceGWilson said:
Correct. And if Grier DOESN'T have final say in the draft as some claim, the problem is Flo and Grier will be here a lot longer. Personally, I doubt Grier is in danger.
Click to expand...