fansinceGWilson said:
PFF graded him 28th out of 67 guards who played at least 500 snaps last season. Is that kind of middling production really worth an APY of $10 million? 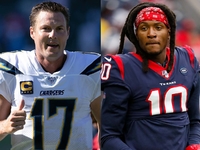 The new league year has brought a flurry of activity, with free agency and trades significantly altering rosters across the NFL. After crunching the numbers, analytics expert Cynthia Frelund spotlights three good moves and three head-scratchers.

28th? He was 43rd overall minus like 6 or 7 ahead of him with barely any snaps in OFF grade. Anyone with over 300 snaps is ok to trust a grade on in my book. Anyhow his film sucks. Hes also our best lineman now.
Last edited: Mar 25, 2020

Dolph N.Fan said:
He might be one of those players that will scale back his play now that he got paid. Haven’t seen that before happen to Miami...
Click to expand...

he’s an OL who has tasted the cut life before. He’s young enough to get another big multi year deal.

64 starting guards, this dude was trending upward and ranked 28th, top half, his last year blocking for a rookie QB

NFL evaluators are torn over the move for Flowers, the former first-round pick who struggled mightily at the tackle spot for the New York Giants.

"They must not have watched the tape," one NFC scout said about Miami's signing.

An NFC exec understands the move.

"His shortcomings as a pass-protector at tackle were minimized at guard," the exec said. "He's a talented guy and I thought it showed up [in 2019]. Now he has to improve his run blocking at that spot."
T

Didn't we once have an OT for 2 or 3 yrs who was not good (Smith?). He went to another team (houston?) and was switched to OG. He was All-Pro as a guard. It happens.

Tropic said:
Didn't we once have an OT for 2 or 3 yrs who was not good (Smith?). He went to another team (houston?) and was switched to OG. He was All-Pro as a guard. It happens.
Click to expand...

Wade Smith went from here to Houston and started there.

Not sure when or if they switched his position, or if he ever made all-pro.

Rank is good. He is now our best Guard. Better then Jessie Davis.
R

This is just typical New York-centric media bias. They are still fixated on Flowers' poor performance at tackle for the Giants in previous seasons, with no consideration for the way he played at guard for the Redskins in 2019. You guys got a good one. We Redskins fans were not happy to see him go.
You must log in or register to reply here.
Share:
Facebook Twitter Reddit Pinterest Tumblr WhatsApp Email Link
Do Not Sell My Personal Information
Top Bottom
Do Not Sell My Personal Information