As you read this remember who carried over a dumb-downed version of Kelly's system as the name "Kelly" in this article is inevitably interchangeable with "Lazor". And if you think you've heard some of this before, you can thank some of the great members right here on this forum.

. . .
The predictability of Kelly’s offense has gone beyond the defense knowing who would get the ball, as defenders frequently now know which play is coming. Kelly, who has long relied on his tempo and the threat of the QB run to keep defenses honest, has done little to hide his offense’s tendencies.

“We knew what plays were coming,” Seahawks linebacker Bobby Wagner said after the game. “Their offense is kind of predictable. They have a lot of plays where they can only run one way.”

Another example came in Week 1 of 2015, as the Atlanta Falcons repeatedly checked into defenses designed to stop whichever play Kelly called. Whenever he called an inside zone — again, with the running back and tight end aligned to the same side — the Falcons, in turn, checked to a defensive stunt designed to blow up that specific play.

Philadelphia’s opponents seemed to know what was coming throughout 2015, even when he tried to mix in other plays. For example, as long as he’s been in the NFL, whenever Kelly’s opponents have geared up to stop his inside zone play, he has typically gone to his counterpunch, a sweep play in which the guard and center both pull to lead the way. But, tipped off by the alignment of the running back and the tight end, defenses were ready for that, too.

And it’s not only the running game — Kelly’s pass game has been in stasis since 2013 as well. . . there has been zero evolution in Kelly’s passing offense since, and, like Kelly’s running game, most defensive coaches can identify what pass play is coming based on how his players align.


One of the most effective plays for Kelly’s offense in 2013 was his “mesh” concept, in which two receivers run quick crossing routes — designed to pick off defenders chasing them — while another receiver curls over the middle and the running back runs a “wheel” route up the sideline. It’s a great play … except when the defense knows it’s coming, something that happened far too often last season.
Click to expand...

*Any chance this could be moved to the Dolphin Forum?

Well ****, never mind. I thought I had mistakenly placed this in the General but looks as though it was moved here.
Last edited by a moderator: Sep 10, 2016

Most fans could predict the plays based on how we lined up, so it must've been all to easy for the defense. This just goes to show you how impressive Tannehill really was to be handcuffed with this offense and no audibles. I bet he's going to have a monster year!


Colostomy Bag said:
Not really. He is failing to address a few major red flags of Lazor's offensive system that caused the passing dysfunction in 2015.

First one was mentioned above concerning the QB's drop. Under Lazor, Tanehill frequently used 2,3 & 5 step drops which allegedly nullifies a pass rush. For the record, no OC has incorporated consistent 7 step drops into their systems since Mike Martz hung Jay Cutler out to dry in 2011. The increase in defensive speed laid deep drops to rest. Plus, anyone who has witnessed the line play over the past few years knows that claim does not hold true and in no way shape or form did it help negate the pass rush.

If you want to talk about inconsistency you have to look no further than the disheveled route concepts of Lazor. Take this for example: 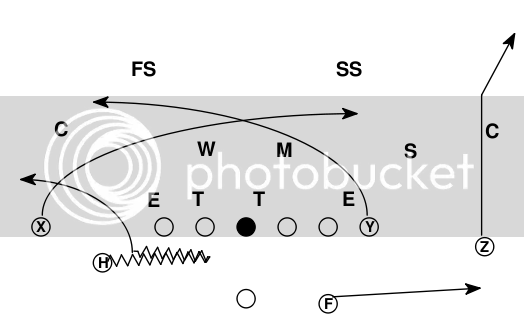 It's a generic mesh concept, one that was very common with Lazor. For discussion purposes Z - Stills, X - Matthews, H - Landry, Y - Cameron, F - Mi . . Mil . . . MMMiller :boohoo: That said, any receiver can be tagged to run the mesh route and the routes can vary on the perimeter.

H (Landry) was the motion man here. It's generally used to ID man or zone. If a defender follows it's man, if the defense remains static it signifies zone. But all in all it's not that simple lest using specific defensive alignment rules, you can actually dictate to the spread offense and force their hand thru adjustments and disguised coverage. This held especially true for Lazor's offense as their was no way to audible out of a bad play in which the defense had cornered you in to. Lazor may have had dozens of formations and literally hundreds of plays to defend, but the one fact that rang true was that only a handful (maybe two) of concepts were used. Once a defense is rehearsed in those concepts they become much simpler to defend as opposed to trying to decipher individual plays.

Anyways, back to the play. Running the mesh, receivers are typically taught to run shoulder to shoulder as they cross setting a natural pick which can be successful vs man coverage. Problem here is that defenses often played zone vs the Fins and were able to dictate the route depth they desired by the depth in their drops into hook zones. Depending on the plays tag, defenses could force the mesh routes to run under or over their coverage and ultimately into their hands. Also realize that the Fins were most often defended by safe zones where they only had to rush 4
(or sometimes a pathetic 3 - .gif here

)
while dropping 7 in cover 2 with 5 underneath and it made the the Mesh and other shallow crossing concepts nearly impossible to execute. Hence the numerous amount of check downs to the flats. An area in which defenses dictated Lazor's offense into succumbing to.

One thing should be blatantly obvious: players do what they are coached to do. When a QB drops back into the pocket, progresses past a covered pass option, and hit outlet receivers, it’s most likely because he does it every day in practice, not because he was born with that skill. Likewise, when a QB looks for one receive and they have no plan of action if that receiver is covered, it is, again most likely a byproduct of his coaching.

Though despite this and the faulty concepts that Lazor tried to establish, Tannehill was still able to set the NFL record for consecutive completions. Not exactly what I would refer to as someone who needs to improve on decision making and ball placement. Those issues stemmed from a problematic offensive system and a former tyrannical offensive coach.

For the other members that also called out Lazor's bull ****, stand up and be noticed. We've caught a lot of flack over the past year or so for blaming the system and the coaches, instead of the players (You da man Tannehill. We're gonna miss you Miller).

You know who you are, you deserve the credit. :brewskis:

It was crazy because in his first season Lazors system seemed to have potential. I actually predicted he would be head coach when Joe eventually was fired :unsure:

I've saw enough to know that offense is doomed in the NFL. No different than Spurrier's offense or the Run and Shoot.

I think I made my mind up sometime in the first four games of 2015.

The funny thing is Kelly's best chance of success is going to be sitting on the bench. Much like Vick like him or not Kap is a good fit for that offense.

The quote from Billicheck about Joe Gibb's offense spoke volumes about the issue. Gibbs had 3 run plays but they had multiple ways to run those plays.

Now I thought early on Lazor showed good concepts when he used more pro looks (things like bringing the slot WR in motion down the line and running a curl to the corner of the end zone), but once he went more to the spread the plays became predictable. Again it doesn't take a rocket scientist to be a good playcaller or coach, you just have to adapt rather than force something to work.

AZStryker said:
Most fans could predict the plays based on how we lined up, so it must've been all to easy for the defense. This just goes to show you how impressive Tannehill really was to be handcuffed with this offense and no audibles. I bet he's going to have a monster year!
Click to expand...

& we're not defensive geniuses like Bill B or Rex R


ChambersWI said:
The quote from Billicheck about Joe Gibb's offense spoke volumes about the issue. Gibbs had 3 run plays but they had multiple ways to run those plays.
Click to expand...