Report: Numerous Miami Dolphins Offensive Lineman Have Been Meeting Up To Train Regularly 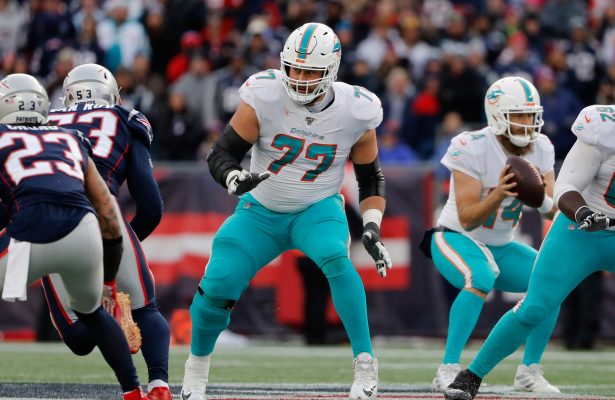 Miami Dolphins rookie and veteran offensive lineman reportedly were working out together in South Florida in preparation for the 2020 NFL season.

“A bunch of them — rookies and veterans — had been getting together regularly on a South Florida field not only for conditioning but also to perfect making the correct line calls and beef up on learning the terminology implemented by new offensive line coach Steve Marshall, who is the team’s third offensive line coach in 11 months,”

Those sluts! How dare they, those unforgivable sluts.

This season will depend on how well the OL plays!
A

While I applaud the dedication and hard work, hopefully this isn’t followed by:

AZStryker said:
While I applaud the dedication and hard work, hopefully this isn’t followed by:

So we have some leadership up front, sounds promising. Let's hope they can stay safe and have taken some precautions before engagement in these workouts.

AZStryker said:
While I applaud the dedication and hard work, hopefully this isn’t followed by:

But if they do they'll more than likely be fine in a couple of weeks. I'd almost prefer the Fins all get the rona now and have that immunity built up for the regular season. Probably a huge competitive advantage.

But on the topic of the article-thats great. Lots of new faces and they need to at least work toward being mentally on the same page.

Kudos to Georgia rookie offensive lineman Solomon Kindley for losing 21 pounds since the college football season ended. He was 352 in January, 337 at the NFL Combine and now 331.


The expectation is that he will lose another seven pounds or so during training camp. The Dolphins expect Kindley to compete at right guard and back up at left guard.

Seems like less when you take it as a percentage of his weight. Overweight people can burn calories more quickly simply due to the extra energy it takes to move their bodies around.

Kindley might burn nearly twice as many calories as I would doing the same exercise.

Kindley is also obviously taking in more calories than we could ever dream of. If he is doing that and working out more, then he has the ability to lose weight at a much faster rate than a normal person.

Basically, the bigger you are, the faster you can potentially lose weight. But that it does not make it any easier.
Last edited: Jun 28, 2020

Easy to lose weight fast if you give up stuff; like my beer, chips, pizza,

I remember when they held Pouncey out of practice to keep him healthy.
And another preseason when they said how important it was to have everyone on the field to gel together.
I like this practice together better.
You must log in or register to reply here.
Share:
Facebook Twitter Reddit Pinterest Tumblr WhatsApp Email Link
Do Not Sell My Personal Information
Top Bottom
Do Not Sell My Personal Information