ARMANDO SALGUERO Fins not interested in Watson | Page 18 | FinHeaven - Miami Dolphins Forums
Menu
Log in
Register
Install the app
You are using an out of date browser. It may not display this or other websites correctly.
You should upgrade or use an alternative browser.

Joe Dolfan said:
So then it would turn out to be:

That seems pretty fair when you look at it like that.

The advantage could go to Houston if Tua takes his game to the next level.
S

TrinidadDolfan said:
Watson is a hard NO.

Save the picks and use them to load up on weapons.

Would you rather have Watson and no picks to get him weapons that we need? Nah, that’s Houston all over again
Click to expand...

Very valid point. But would you change your mind if the Jets became the top landing spot?

It's one thing if San Francisco or Carolina makes the trade. But a team in Miami's division? It's so hard to beat teams with elite quarterbacks.

Just something to consider.
F

SF Dolphin Fan said:
I think they'll want more than what was suggested as well.

With Tua included, Houston would likely deal that #3 for a boatload of picks.

It's also why a Miami offer could be more enticing than a Jets offer. Houston would likely draft a quarterback at #2, the pick obtained from NYJ.
Click to expand...

The interesting aspect to it all is that he has a no trade clause and 5 years left on his contract. It doesn’t matter what a team offers if he doesn’t want to play there long term. That is part of the reason I really don’t think he will end up forcing a trade. Just don’t see how the Texans and another team could come to realistic terms for a player of his caliber.

Frankly my dear, I don't give a damn. 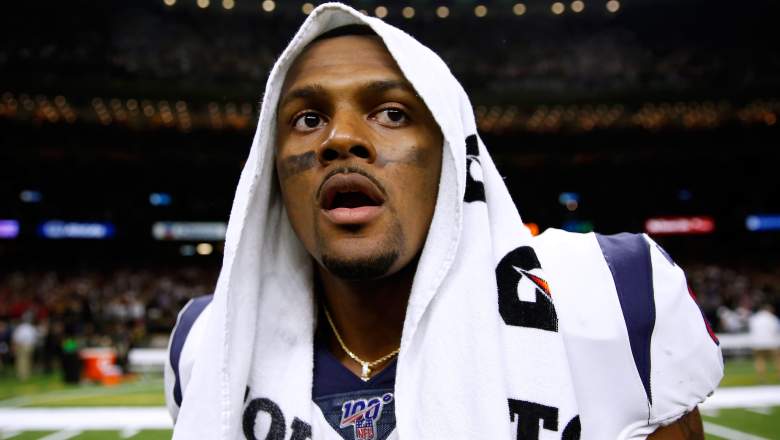 Deshaun Watson wants out of Houston and he looks spectacular in a Falcons jacket.

SF Dolphin Fan said:
Very valid point. But would you change your mind if the Jets became the top landing spot?

It's one thing if San Francisco or Carolina makes the trade. But a team in Miami's division? It's so hard to beat teams with elite quarterbacks.

Let them have him...He will wilt like the rest of them have there.
Ill take my chances with Tua and a BUNCH of upgrades across the board. Jets can overpay and stay in the basement forever if they want.
S

Good_Dylan said:
Let them have him...He will wilt like the rest of them have there.
Ill take my chances with Tua and a BUNCH of upgrades across the board. Jets can overpay and stay in the basement forever if they want.
Click to expand...

No question that could work for Miami. That #3 pick has a lot of value attached to it.

The Dolphins have the picks to put together talent around Tua. We'll see where it goes.

hoops said:
would you trade for him and if so what’s your offer keeping in mind you are taking on that contract?
Click to expand...

I would absolutely consider it, yes. Doing it would be based on cost and internal opinion of Tua. I'm not inside those doors and i don't know what Tua does in practice, what his teammates think of him, etc. It's strictly an outside opinion.

Watson is a proven NFL QB commodity. Those are hard to come by. Tua is not that yet. There's a chance he develops into one but there’s also the chance he’s another mid level QB the Dolphins have failed to win with since Marino retired. I was incredibly high on Tua coming in and even I’m sitting back scratching my head with some of what I saw this year. I never buy jerseys anymore bc of how quickly guys leave or get traded. I bought 2 Tua vapor jerseys. That's how much i thought he would be THE GUY in Miami.

Watson was 10th in pass attempts but 1st in yards, yards per attempt/completion and 2nd in adjusted yards per pass attempt (behind Rodgers). His 8.9 yards per attempt were over half a yard better than 2nd place Kirk Cousins, 0.8 better than Mahomes and a full yard better than Allen. He lost his #1 WR and played better. Great QBs elevate their play when the surrounding cast isn't there. Rodgers does it every year. Brady did it will a cast of misfit toys in NE. Watson improved after losing Hopkins. He played some of his best games at the end of the year with Cooks, Coutee, Hansen and Akins. Yeah you can say his team sucks so how much did he really elevate them? Okay, there's merit there.....but looking deeper into games you see many close games and Houston's defense was terrible. The sacks concern me and while i've seen his ACL injuries listed on here, is that really more significant than Tua's hip?

As for comp - that's tough.
- Tua was taken #5.....but do they want him? If not, what does Miami do with him? Top5 value is tough to eat.
- This year's #3 pick is incredibly valuable. It's typically takes multiple picks, often times multiple 1st rounders, to get Top5 in the draft. That has to be taken into consideration.

If some asshats want to trade Tua....Trade him to the Pats and see what will happen.
T

Namor said:
If some asshats want to trade Tua....Trade him to the Pats and see what will happen.
Click to expand...