lurking said:
So you find a torn ACL an excuse, some people need to get back to reality and give up this fantasy land crap where everything is an excuse.
Click to expand...

An acl is an excuse for drops? And geez you’re late with this reply.

Williams has had some drops at rather unfortunate times but all in all he's coming back quickly from his injury. Let him have a few more games to round out to form, he'll be fine/

Sirspud said:
I don't know where people in this thread are getting the idea that Preston won't produce until we get a real QB. Like, Fitz does nothing but throw it up to his receivers with a chance to make a play. He almost always gets 200-300 yards, even we don't have much actual chance of winning the game. His receivers get a ton of chances and to his detriment he is always looking first to make a play downfield to his receivers.

Tua is a guy who excels at timing and field vision. Preston is a physical receiver, not a shake and bake guy, same for Parker. They love jump balls and contested catches which is not a key part of Tua's game, nor are many young QB's all that great at it. Those expecting better production will likely be disappointed. Benefits from a QB like Tua will come elsewhere, and that's when he's ready for the speed of the game.
Click to expand...

Fitzy is great at trusting his receivers to come down with 50/50 balls. And Parker and Williams are BOTH good at that. However, you know what 50/50 balls don't let you do? They don't let you get YAC. What does that is (as you stated) "timing and field vision"...and...anticipation. DBs are closing on open receivers before Fitzy even sees them - he's missed multiple open receivers. Tua will (when he gets on the field) see them *as* they're coming open.

...seems to me "confidence" is a whole body / mind state of being and

no doubt Preston's confidence took a hit with the injury. Besides that

super hard to get back -- just not catching 500 balls a day and running routes etc.

To knock on HIM right now trends towards predatory IMO. Save the deep evaluation for '21.

claytonduper said:
It is quite remarkable that he is out there playing less than 1 year after his injury, surgery and recovery. Most players do not get back to pre-injury form (100%) for 18 months. Take into account the other factors already discussed it will be a slow start for him. I expect him to get better throughout the season. He is one of our less pressing concerns.
Click to expand...

I agree Preston is a less pressing concern now.
But we need 2 of our first four picks to be WRs.

Dolph N.Fan said:
An acl is an excuse for drops? And geez you’re late with this reply.
Click to expand...

Nowhere in your post were you talking about Preston Williams drops, Not one blurb . Maybe you can go back and edit your post to make it look like that’s what you we’re talking about.

Out of the players in the 2019 draft PW is by far my favorite and the only one starting outside of our 13th overall pic. Easy to excuse the slow start coming off an ACL.

Best game of his young career. More to come.

Congrats to Preston Williams on his first 100 yard game of his career! 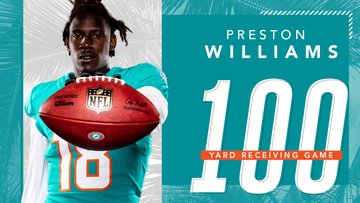 I also realized it takes like 3 weeks after acl injury to have surgery because of swelling and such. So he realistically had surgery Nov 26ish. Meaning right now hes only about 10.5 months removed from acl surgery. still alot of improving to do.
K

FinsWinEventually said:
For all the hype, this guy plays exactly like an UDFA. Hes a 5th WR on most teams...on the Raiders, he's on PS. Yet he starts for the Fins. He's a joke. A very bad joke. The sooner the Dolohins move on from him the better they'll be.
Click to expand...

well after the game against the 49ers now do you feel , hes just coming back from knee surgery ,got to give him a little time
B

kenneth c cooper said:
well after the game against the 49ers now do you feel , hes just coming back from knee surgery ,got to give him a little time
Click to expand...

I am happy that he had a good game. Let see if he can have another.
C

This might not age well. Preston seemed promising before his injury last year and he seems to be coming on now and getting back into his groove. It takes time with no pre season and coming off a bad injury.

The kid is very talented...I got to see him up close at the Tampa joint practice before his rookie year.